We are pleased to announce that the St. Peter Chanel Vinnies raised a total of approx $200 through their recent silent auction, we look forward to being able to use that money to purchase trauma teddies for the fire brigade. Many thanks to all those who kindly supported our fundraiser.
Posted by St Vincent de Paul Vinnies at 12:41 No comments:

On Thursday 5th December a battle pursued on the St. Peter Chanel field between the rich and ruling class of France and the revolutionaries standing up for the working class poor. As part of this exercise the St. Peter Chanel Vinnies constructed a barricade for the battle, a great way of putting into practice what they had learned from watching the movie, 'No Time Like Now' which talks about the barricades constructed during the time of Frederic Ozanam and the origins of the St. Vincent de Paul Society. A great time was had by all and miraculously - those who were hit by ammunition came back to life to battle on! To follow this the Vinnies enjoyed an end of year feast to celebrate all the work they had done throughout the year.
Well done Vinnies for putting your faith into action during 2019. 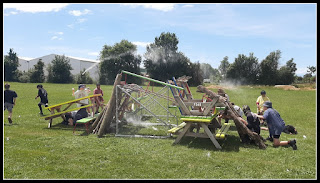 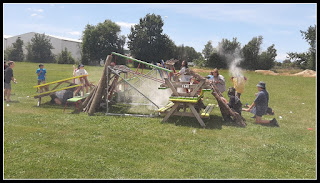 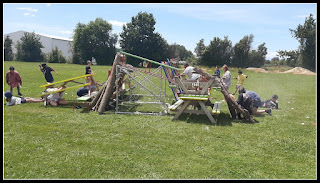 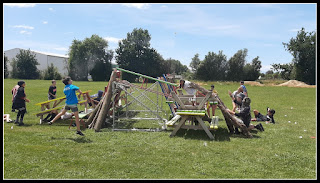 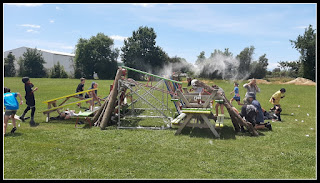 Posted by St Vincent de Paul Vinnies at 22:33 No comments:

The silent auction for the turtle mobiles the St. Peter Chanel Vinnies created is now underway. We will keep you posted as more information comes to light. 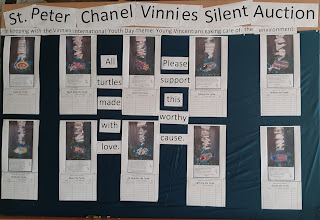 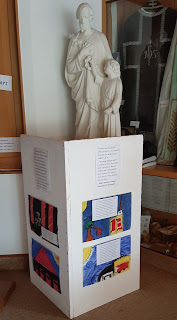 Posted by St Vincent de Paul Vinnies at 18:10 No comments:

Knitted Trauma Teddies are beginning to come in

We have received the first of the knitted trauma teddies which we will be presenting to the fire brigade to provide comfort to young people affected by fire and accident. These two teddies were knitted by a lovely parishioner in her mid-eighties and in the blue and yellow colours that our New Zealand Fire Brigade wear. We look forward to having more knitted trauma teddies come in over the next little while. If anyone would be interested in knitting teddies for the fire brigade please contact Philippa, the local Vinnies Youth Coordinator. 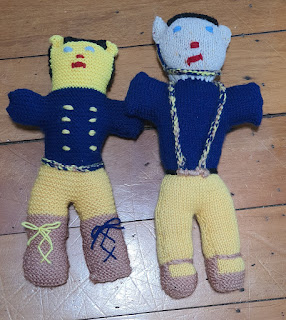 Posted by St Vincent de Paul Vinnies at 16:30 No comments:

Educating the Vinnies as to French Civil War

As a Society we can't forget that it was out of the political unrest of France in the 19th Century which led on to civil war and as a result oppression and exploitation that indeed the Society of St. Vincent de Paul has its foundations. This information pops up in the movie 'No Time Like Now' as the Vinnies learn about the founder of the Society, Blessed Frederic Ozanam and in the material they read and learn about in regard to Sr Rosalie Rendu, a female role-model of the Society who also lived in this time. To bring this to life a little more for the St. Peter Chanel Vinnies during Term 3, the Vinnies had the opportunity of watching the movie Les Miserables. This movie captures many of the issues that Frederic Ozanam and Sr Rosalie Rendu worked so hard to address -- issues such as the need for compulsory arbitration in industrial disputes, homelessness, disease, starvation and death.


It was interesting to notice while watching this movie that a television documentary in regard to what is presently happening between Hong Kong and China at the moment, showed a group of people on the streets of Hong Kong singing one of the songs from this famous musical. Issues that were around at the time of the founding of the Society of St. Vincent de Paul are still with us today throughout the world such as homelessness, unemployment, civil unrest. However, through the Society of St. Vincent de Paul, there are still Vincentians at work seeking ways to address these issues. As in the Les Mis movie and in Frederic Ozanam's time, young people play an important role in that change. 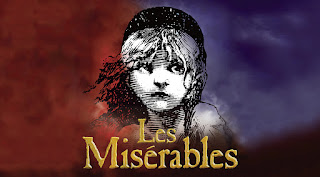 Posted by St Vincent de Paul Vinnies at 16:24 No comments:

Turtles Ready to Go Out to New Homes

The St. Peter Chanel Vinnies have now completed their turtles, christened them with names and discovered the personality and message to the world each of their turtles has. The turtles are now ready to go on display in the Church foyer in another couple of weeks to be part of a silent auction raising funds to purchase teddy bears for the local fire brigade to carry on board their fire trucks. With the theme of the Vinnies International Youth Day this year being, 'Young Vincentians taking care of the environment!' This has been a great way of being able to further endorse this message in the community.

Posted by St Vincent de Paul Vinnies at 14:14 No comments: 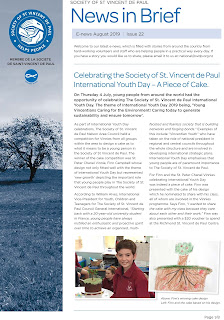 Posted by St Vincent de Paul Vinnies at 00:07 No comments: